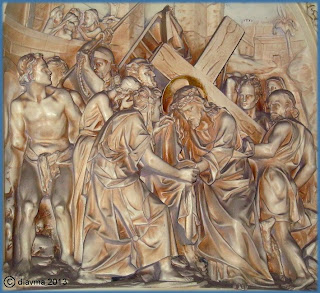 "You have not received a spirit of slavery to fall back into fear". +

The Epistle: My brethren, we are debtors, not to the flesh: to live after the manner of the flesh;  for if you live after the manner of the flesh, you will die; but if through the Spirit you mortify the deeds of the body, you will live. For as many as are led by the Spirit of God, they are the sons of God. For you have not received the spirit of servitude again into fear: you have received a spirit of sonship, in which we cry aloud, Abba, Father; the Spirit himself bearing witness with our spirit, that we are children of God;and if children then heirs; heirs of God, and fellow-heirs with Christ; if so be that we suffer with hum, that we may also be glorified with him,

St Paul tells us in today's Epistle that we need to kill off (mortify) the old, sinful nature "through the Spirit". If we aren't doing this, we are risking spiritual death. And we know from the end of this passage that one way we mortify the "flesh" is suffering with Christ, which Christ said was taking up our cross to follow him. This taking up our cross includes voluntary fasting and acts of self-denial, but it also includes patiently accepting persecution and insults for our faith. And, of course, it includes resisting temptation.

Now that doesn't sound like much fun, does it. It certainly sounds like hard work and pain will be involved. Very true. But the interesting thing is that the Apostle also says that we can do this because as Christians we are not slaves and are not bound by fear, as I quoted at the beginning. Instead we are children of the King, and thus his heirs. And, as princes and princesses, we have received knowledge of our renewed identity by the Holy Spirit revealing itself to our spirits.

How can self-mortification be freedom from slavery? How can taking up our cross be fearless? How can self-denial be equated to the joy of a royal life as an heir of the King of Kings?

Yet God does not lie. And, in fact, it is nowhere near as paradoxical as it might look. The truth is that those who give themselves over to excess and to sin, find themselves enslaved and ensnared and unhappy. How many of the rich and famous end up with broken marriages, breakdowns and feelings of emptiness. Indeed, how many do we hear about spending time in "rehab"! (Personally, I wonder whether they would be better off publicly repenting rather than publicly rehab-ing, and maybe spending some time in a quiet monastery helping in the kitchen or garden as penance. And as therapy. OK, you're right, probably not going to happen!) So many celebrities, smiling on the outside, but miserable on the inside, as they often tell us later.

Not only that, but all those who throw themselves into the world and the flesh find that one of two things happen. That which promised so much, and began as fun, becomes boring and disappointing, so they either carry on regardless, or search for the bigger thrill, the "true" fulfillment. Needless to say, those who carry on regardless are unhappy, and feel powerless to do anything about it. But what about those who go on to try the harder drug, the wilder parties, the more perverse sexual activity, or just the more all-consuming higher-paying job that keeps them from their families and everything else that matters in life? Well, they can keep the illusion of happiness going a bit longer, cause a lot more collateral damage around them, deaden their own soul to a greater degree, and still end up a complete mess. "Awesome."

So, if freedom is not found in sin, just the contrary, then mortifying the sinful nature can go along with freedom. More to the point, such freedom requires such mortification. But what about happiness? Were is it to be found? Well, clearly, true, fearless joy is found in Christ, in knowing and experiencing God, in loving God and neighbour.

And here is the really interesting thing. The more we seek the Lord and find our satisfaction, our fulfillment in Him, the less the flesh and the world can draw our desire or keep our attention. The more we pray, meditate upon God and his word, and participate in Church, fellowship and sacrament, the less we are excited or enticed by other things. Christians can even have the strange experience of thinking that we want or will enjoy some extra, quite innocent, "treat"or "luxury", then finding we lose interest when we try to partake of it. The more we walk in the Spirit, the easier it becomes to mortify the flesh, because the flesh becomes increasingly mundane. It suffers by comparison with higher appetites, so to speak. And our appetites themselves are ennobled.

We do not become angels, nor are we meant to be. The body has its place, and innocent pleasure is still innocent. However, the path to freedom, peace and joy really is making God numero uno and practicing self-discipline. And all of this is to be done through the Spirit of Christ. +

Photo shows 0ne of the "Stations Of The Cross" art reliefs on the walls in the chapel which we use for St Hlida's Anglican Catholic Sunday Mass, it is located at  St Mary's School (its entrance is in Victoria St) Maitland NSW Australia.
Click on image to enlarge