Give, and it will be given to you

“Give, and it will be given to you. Good measure, pressed down, shaken together and running over, will be poured into your lap. For with the measure you use, it will be measured to you.” [Luke 6:38] +

A generous person will find that the measure of what they receive in return is not only from God, but also from "men". Compare earlier Luke 6 verses 32b and 33b: “Even sinners love those who love them… Even sinners do good to those who are good to them.”

At the beginning of each mass we are reminded “…Thou shalt love the Lord thy God with all thy heart, and all thy mind, and with all thy strength. This is the first and great commandment. And the second is like unto it; Thou shalt love thy neighbour as thyself…”  Generosity is a natural response to love. People, believers or not, respond to generosity of spirit. And it’s not just about giving money, either.

The work of Sister Bernice Elphick of the Sisters of Charity is an example to how such giving gets given back by both God and man. An extraordinary love of people inspired 60 years of service by Sister Bernice, a pioneer of Australian health care services. LINK: Read More about her work....

According to her former colleague, Sr Laureen Dixon. "Her love of people is extraordinary, so as a great networker she is able to connect the people and get them enthused and that is one thing that is obvious in the way that she has led." When Australia's richest man Kerry Packer died, the media referred to Sr Bernice as "the only woman Kerry Packer can't say no to". When she needed money for a new project at St Vincent's, she would often turn to Mr Packer. Clearly and compellingly, she would outline her case and, within minutes, the media magnate would be signing a cheque. She had a way of stimulating the unbelieving Kerry Packer’s generosity. His humorous protest to her visits was that he “couldn't say no”. Why? She's a nun. He knew she had given her life to God in celibacy, personal poverty and obedience, and given her time to prayer and service to the needy. Mrs Packer is quoted as saying "She would just say, 'Darling, I know you'll fix it,’ But because of the respect in which we all held her, we knew she was not asking for any money that was not needed." And what did Mr Packer have to say? "He says it has been a great joy to know her - but that it has not been inexpensive." LINK: "Sydney Morning Herald" article....

Another example similar to Sister Bernice Elphick is the Salvos we often see in the shopping centers and local clubs selling their magazine and collecting donations. You will find there is little or no complaint about their panhandling. Instead, out come the wallets! People who are not part of the church and who otherwise wouldn’t even consider making a donation become generous. Why? Because they will know that what the Salvos do within the community is for the poor and dysfunctional. 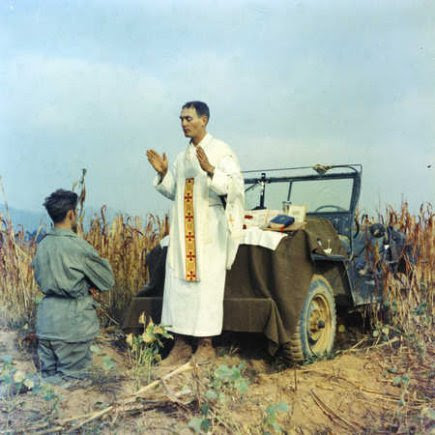 Father Emil Kapaun was posthumously given the Congressional Medal of Honour recently for sacrificial courage in Korea. What made him extraordinary? Bicycling to wherever the shooting was to support. Showing incredible faith during the chaos, dodging bullets and explosions, Father Kapaun raced between foxholes, out past the front lines and into no-man’s land -- dragging the wounded to safety.  LINK: Article on Fr Emil and his award...

Father Emil Kapaun was known for dragging wounded out under fire. When his commanders ordered an evacuation, he chose to stay -- gathering the injured, tending to their wounds. When the enemy broke through and the combat was hand-to-hand, he carried on -- comforting the injured and the dying, offering some measure of peace as they left this Earth. Exhorting others by word and example to carry wounded after capture when he realised they were simply being shot.

Roy Wenzl, a reporter and the co-author of an upcoming biography of Kapaun said of him: “Combat veterans are pretty reluctant to talk about (their experiences)," "But this was a pretty dramatic exception. They all wanted to talk about him. They regarded him as a heroic figure, the greatest person they ever knew."

In this image Father Emil Kapaun shows his pipe, which was shot out of his mouth by a sniper during the Korean War.

What sort of response did Fr Emil receive for his selfless giving? Catholics, protestants and Jews prayed the rosary together with him! Followed him more than their officers. Tried to protect him when enemy decided he had to go to the hospital, which was tantamount to a death sentence.

Again, notice that the original generosity and the generous response can both involve things other than money. Christian love touches hearts. No clever argument, no powerful preaching, will have the same effect over hard hearts, even though the words will still be necessary to communicate the faith at some point.

So, let us light up our world with generosity of spirit. +


Join us at the Anglican Catholic Church for prayer and Holy Communion Next Sunday.