The following is a sermon summary. 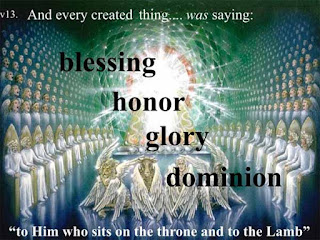 “Worthy is the Lamb who was slain, to receive power and wealth and wisdom and might and honor and glory and blessing!” [Introit : Revelation 5:12] +

Confusing verse:
How can the Lord receive wisdom when he is omniscient ?
How can he receive power when he is the omnipotent Creator?
What does the one for the Earth is his footstool need with wealth?
What does this act of worship mean?

The connection between these interpretations is the recognition that all the beauty has come from Him, and so it all belongs to Him and finds its fulfillment in Him. That is who we follow and who we worship. And He truly is worthy: worthy as God and worthy as the Second Adam, the Man who has redeemed and restored humanity.

But, as I noted before, Christ's Kingship is not merely over us but, in the end, with us in partnership. This astonishing truth is made clearer as we look further into the chapter and what came before it. Who spoke this praise? The angels, but also the “Elders”. Who are they? Allow me to read from more of the chapter, and then quote from a Biblical Commentary.

[English Standard Version: Revelation of John Chapter 5]
Then I saw in the right hand of him who was seated on the throne a scroll written within and on the back, sealed with seven seals. And I saw a strong angel proclaiming with a loud voice, Who is worthy to open the scroll and break its seals? And no one in heaven or on earth or under the earth was able to open the scroll or to look into it, and I began to weep loudly because no one was found worthy to open the scroll or to look into it. And one of the elders said to me, Weep no more; behold, the Lion of the tribe of Judah, the Root of David, has conquered, so that he can open the scroll and its seven seals. And between the throne and the four living creatures and among the elders I saw a Lamb standing, as though it had been slain, with seven horns and with seven eyes, which are the seven spirits of God sent out into all the earth. And he went and took the scroll from the right hand of him who was seated on the throne. And when he had taken the scroll, the four living creatures and the twenty-four elders fell down before the Lamb, each holding a harp, and golden bowls full of incense, which are the prayers of the saints. And they sang a new song, saying, Worthy are you to take the scroll and to open its seals, for you were slain, and by your blood you ransomed people for God from every tribe and language and people and nation, and you have made them a kingdom and priests to our God, and they shall reign on the earth. Then I looked, and I heard around the throne and the living creatures and the elders the voice of many angels, numbering myriads of myriads and thousands of thousands, saying with a loud voice, Worthy is the Lamb who was slain, to receive power and wealth and wisdom and might and honor and glory and blessing! And I heard every creature in heaven and on earth and under the earth and in the sea, and all that is in them, saying, To him who sits on the throne and to the Lamb be blessing and honor and glory and might forever and ever! And the four living creatures said, Amen! and the elders fell down and worshiped.

[Excerpt from the Navarre Bible Commentary]:
God's sovereignty over the world--as symbolized by the throne--is shared in by others whom the vision also portrays as seated on thrones. They are symbolically described as twenty-four elders who act as a kind of heavenly council or senate. These elders appear frequently in the course of the book, always positioned beside God, rendering him tribute of glory and worship (cf. 4:10) "the twenty-four elders fall down before him who is seated on the throne and worship him who lives for ever and ever; they cast their crowns before the throne, singing," (cf. 5:9) “Worthy art thou to take the scroll and to open its seals, for thou wast slain and by thy blood didst ransom men for God from every tribe and tongue and people and nation," (cf. 19:4) "And the twenty-four elders and the four living creatures fell down and worshiped God who is seated on the throne, saying, “Amen. Hallelujah!”, offering him the prayers of the faithful (cf. 5:8) "And when he had taken the scroll, the four living creatures and the twenty-four elders fell down before the Lamb, each holding a harp, and with golden bowls full of incense, which are the prayers of the saints; or explaining events to the seer" (cf. 5:5) "Then one of the elders said to me, “Weep not; lo, the Lion of the tribe of Judah, the Root of David, has conquered, so that he can open the scroll and its seven seals.”(cf. 7:13) "Then one of the elders addressed me, saying, “Who are these, clothed in white robes, and whence have they come?”. It is not clear whether they stand for angels or saints; the Fathers and recent commentators offer both interpretations.

The symbolic number (twenty-four) and the way they are described suggest that they stand for saints in the glory of heaven. They are twenty-four--twelve plus twelve, that is, the number of the tribes of Israel plus that of the Apostles. Our Lord in fact promised the latter that they would sit on thrones (cf. Mt 19:28) "Jesus said to them, “Truly, I say to you, in the new world, when the Son of man shall sit on his glorious throne, you who have followed me will also sit on twelve thrones, judging the twelve tribes of Israel". The twenty-four elders, then, would represent the heavenly Church, which includes the old and the new Israel and which, in heaven, renders God the tribute of perfect praise and intercedes for the Church on earth. The number twenty-four has also been seen as reflecting the twenty-four priestly classes of Judaism, thereby emphasizing the liturgical dimension of heaven (cf. 1 Chron 24:7-18) "The first lot fell to Jehoi′arib, the second to Jedai′ah, the third to Harim, the fourth to Se-o′rim, the fifth to Malchi′jah, the sixth to Mi′jamin, the seventh to Hakkoz, the eighth to Abi′jah, the ninth to Jeshua, the tenth to Shecani′ah, the eleventh to Eli′ashib, the twelfth to Jakim, the thirteenth to Huppah, the fourteenth to Jesheb′e-ab, the fifteenth to Bilgah, the sixteenth to Immer, the seventeenth to Hezir, the eighteenth to Hap′pizzez, the nineteenth to Pethahi′ah, the twentieth to Jehez′kel, the twenty-first to Jachin, the twenty-second to Gamul, the twenty-third to Delai′ah, the twenty-fourth to Ma-azi′ah". (cf. 25:1) "David and the chiefs of the service also set apart for the service certain of the sons of Asaph, and of Heman, and of Jedu′thun, who should prophesy with lyres, with harps, and with cymbals. The list of those who did the work and of their duties was:" (cf. 9-13) "besides their kinsmen, heads of their fathers’ houses, one thousand seven hundred and sixty, very able men for the work of the service of the house of God.". Whichever is the case, the white garments indicate that they have achieved everlasting salvation (cf. 3:5) "He who conquers shall be clad thus in white garments, and I will not blot his name out of the book of life; I will confess his name before my Father and before his angels". and the goldencrowns stand for the reward they have earned (cf. 2:10) "Do not fear what you are about to suffer. Behold, the devil is about to throw some of you into prison, that you may be tested, and for ten days you will have tribulation. Be faithful unto death, and I will give you the crown of life.", or the prominence among Christians, who have been promised that, if they come out victorious, they will sit on Christ's throne (cf. 3:21) "He who conquers, I will grant him to sit with me on my throne, as I myself conquered and sat down with my Father on his throne". [NB: these vv just before first mention of 24]

In other words, the Elders do probably represent glorified human Saints of the whole people of God. The fact that we see them offering the prayers of the saints (that word here referring to Christians generally, as is normal in the New Testament) is one of the reasons that Catholics ask for the prayers of the Saints in heaven. Thus we discover that the kingly priesthood, the reign of believers, begins even now, is intensified after death, and is fulfilled in eternity.

And in the same way Christ makes a gift to us of Himself and His kingdom, we find here that we give all of ourselves to Him in return for He is worthy, and yet lose nothing and gain everything in the final analysis. Thus the circle is complete, the interchange of love and blessing being perfected in the union of Christ with his Bride, the Church. +