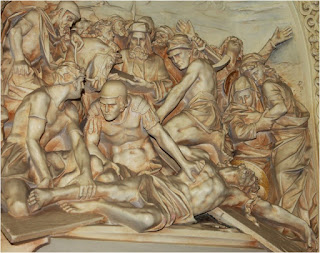 "Save thy self", they said.

The Following is a transcript of an oral sermon
- presented by Fr Matthew to his Parish.

Three times this challenge is made to Jesus during the crucifixion. "Save yourself".

The Jewish rulers justifying themselves to those around "Let him save himself if he be the Christ". For them this was the proof that he wasn't who he said he was, after all if he were the messiah how could he possibly be subject to crucifixion and so this was their self justification. The Roman soldiers heard what the Jews were saying and jumped on it "If you're the king of Jews, save yourself". The angry criminal on one of the crosses beside him, "If you're the Christ, save yourself and us." The catch cry of the Jewish leaders who had arranged for Jesus execution is thus taken up by others. This may well have seemed a propaganda coop for them, they had made their point. They are publicly making the argument that the victims failure to save himself proves he is not the power he claims to be. So, they were justified in their own minds in condemning him in that claim.

What is the reason all these men have rejected Christs claim to be The Christ? The very claim he made at his trial before the crucifixion, "You shall see the son of man sitting on the right hand of Power (That's God's right hand) and coming in the clouds of heaven". One of the few times when asked that direct question "are you the messiah?" he answered in a very direct way.

So, why don't they believe him? Not because they have no evidence of his identity or his abilities. These same people who wanted him dead, wanted him dead because they knew he was convincing the people by virtue of the miracles and teaching. They knew about the miracles which had become very well known. His behaviour and teaching was unique, it was bracing, it cut people to the heart. Even many of the Romans were in some way aware of that teaching to some degree in the immediate vicinity, some of them had heard Jesus. But with all that evidence they had, it was not the sort they wanted and that is the key. The Jews wanted either a quiet or unthreatening Rabbi or a mighty political leader who would cause trouble for the Romans and win freedom for the nation of Israel. What they didn't want was a Messiah who would cause trouble for Israel and allow the Romans to keep them under repression. The Romans also expected outward strength, an invulnerability from someone who claimed to be a divine king. From their perspective if you were a god you had power and you could do what you liked and nobody could hurt you. So, from their perspective this Jesus, if he were really a divine king, should have been crushing others rather than being crushed. That was how they saw it. The criminal next to Jesus who abuses him (the abuser of our Lord) felt that such power, if Jesus had this power, MUST include and end to HIS personal pain. That is why he says "Save yourself and us" in otherwords "save me as well, if you are the Messiah" 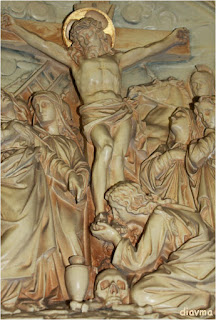 Now, little has changed since that day. People still justify unbelief in just the same way. The evidence is there. They ignore the evidence that they do have, whether it is historical evidence for Christ's resurrection and miracles, whether it is intuitive or experiential evidence of changed lives and spiritual insight, or whether it is other kinds of arguments from philosophy. Whatever the evidence is, it is there but they are not interested in that. Instead they demand evidence on their own terms. As if God were a vending machine or the subject of an experiment that they could manipulate. As if they are saying this "you want me to believe in you God, meet my expectations, show your supposed power more openly on demand and while you are at it, take away our pain." Still God answers the same way "I AM God, You are not. Your thoughts are not my thoughts. I have shown and continue to show power in the everyday glory of creation, through occasional miracles and through the weakness of the cross which has a life changing power of mercy and purpose and I WILL take away your pain AFTER I have taken away your sin, if you will be patient and trust that the eternal joys that I have in store for you far outway the pain of this mortal existence".

The Jews and the Romans wanted a power that could not be conquered and in fact such a power was present at the cross but they could not recognise it. It was the power of Love and the power that was going to be giving new life at the resurrection. What Jesus did, His miracles, especially his resurrection, was indication of who he was but so was the cross, in a strange way. What the people of Israel and the Romans refused to realise was that God had predicted in the old testament that the Christ would suffer. That he would suffer for others, indeed for all, but that wasn't the bit that interested them. God does supply us with what we need to know the truth, but it may not always be what we want (to know the truth). We can not demand evidence on our own terms but God has already given us what we need.

As we celebrate the Mass of the last supper, we recognise that the power of God in nature, in miracles and in the cross is concentrated here in the sacrament. Common but nourishing bread and wine made from the fruit of the earth are supernaturally transformed into heavenly food and they show forth the salvation of the cross. St Paul tells us that every time we celebrate this communion we proclaim the Lords death until he comes. So, creation, the cross, and even the supernatural are shown forth in the Eucharist.

Let us give thanks.
In the name of The Father and of The Son and of The Holy Spirit. Amen