Owe no man any thing, but to love one another: for he that loveth his neighbour hath fulfilled the law. For this, Thou shalt not commit adultery, Thou shalt not kill, Thou shalt not steal, Thou shalt not bear false witness, Thou shalt not covet; and if there be any other commandment, it is briefly comprehended in this saying, namely, Thou shalt love thy neighbour as thyself. Love worketh no ill to his neighbour: therefore love is the fulfilling of the law. And that, knowing the time, that now it is high time to awake out of sleep: for now is our salvation nearer than when we believed. The night is far spent, the day is at hand: let us therefore cast off the works of darkness, and let us put on the armour of light. Let us walk honestly, as in the day; not in rioting and drunkenness, not in chambering and wantonness, not in strife and envying. But put ye on the Lord Jesus Christ, and make not provision for the flesh, to fulfil the lusts thereof.  (Romans 13:8-14)

"The day" usually refers to the Last Day, the day of Christ's Return and of Final Judgement in St Paul's letters. In today's Epistle he warns Christians they must live in holy love, since the completion of their salvation is getting closer. For the whole of Advent we meditate upon the Four Last Things: Death and Judgement, Heaven and Hell.

Some in the Church are ashamed of at least half of these. They are often happy to talk of Heaven, and may even be willing to remind people of the inevitability of Death, though more as a somewhat sad departure than as a danger. For Death can only be feared as well as a grieved if Judgement and Hell are also part of the equation. 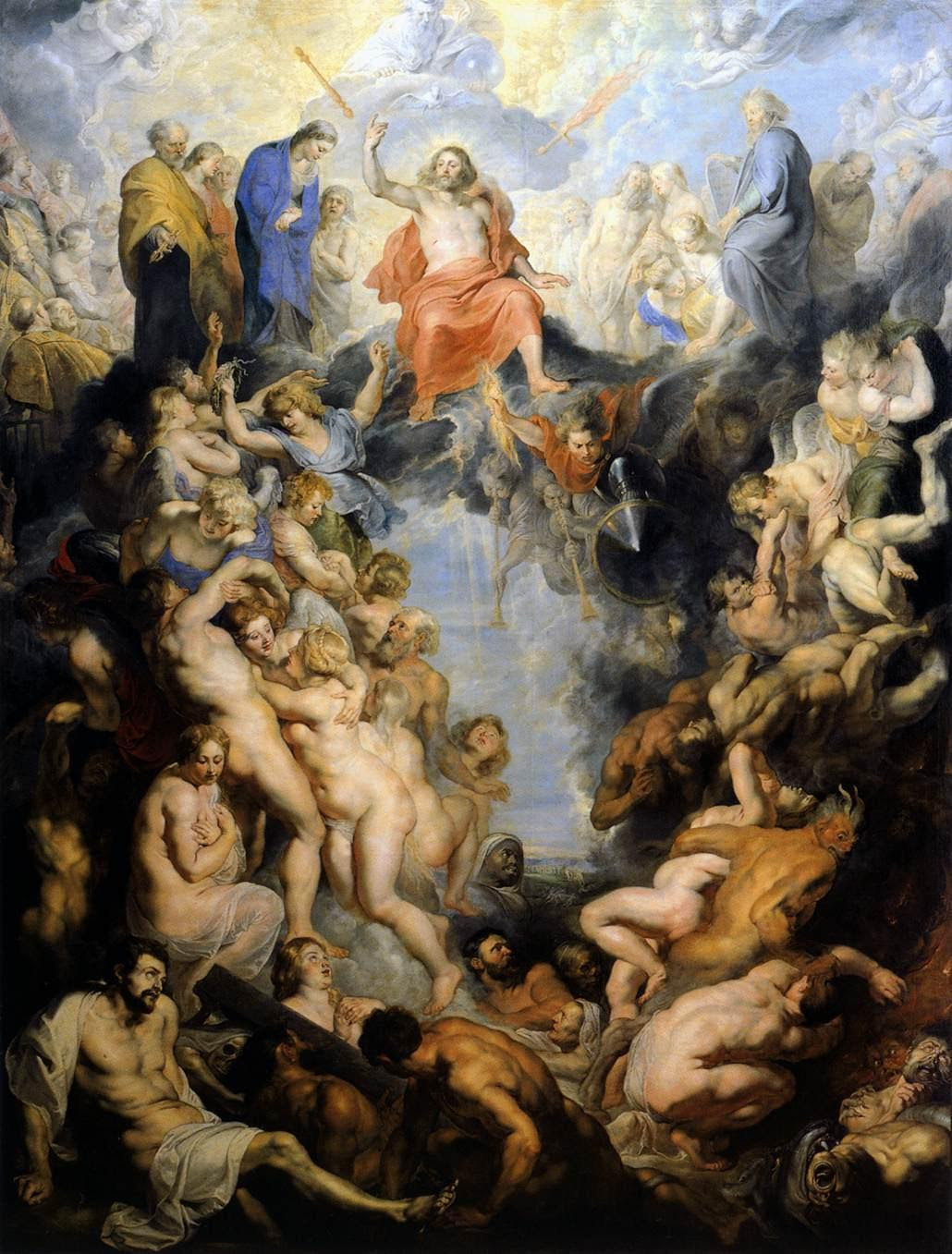 But the dark shadow of coming Justice has been fundamental to the Gospel, the Good News, from the beginning. “And that repentance and remission of sins should be preached in his name among all nations, beginning at Jerusalem” Luke 24:47, “Now when they heard this, they were pricked in their heart, and said unto Peter and to the rest of the apostles, Men and brethren, what shall we do? Then Peter said unto them, Repent, and be baptized every one of you in the name of Jesus Christ for the remission of sins, and ye shall receive the gift of the Holy Ghost". Acts 2:37-38. "And he commanded us to preach unto the people, and to testify that it is he which was ordained of God to be the Judge of quick and dead. To him give all the prophets witness, that through his name whosoever believeth in him shall receive remission of sins". Acts 10:42-43. "And after certain days, when Felix came with his wife Drusilla, which was a Jewess, he sent for Paul, and heard him concerning the faith in Christ. And as he reasoned of righteousness, temperance, and judgment to come, Felix trembled, and answered, Go thy way for this time; when I have a convenient season, I will call for thee". Acts 24:24-25. This does not mean that early preaching was mostly focused on threatening themes of God's wrath. As we just heard, repentance goes with remission, justice with mercy.  [Compare with "At that time Jesus answered and said, I thank thee, O Father, Lord of heaven and earth, because thou hast hid these things from the wise and prudent, and hast revealed them unto babes. Even so, Father: for so it seemed good in thy sight. All things are delivered unto me of my Father: and no man knoweth the Son, but the Father; neither knoweth any man the Father, save the Son, and he to whomsoever the Son will reveal him. Come unto me, all ye that labour and are heavy laden, and I will give you rest. Take my yoke upon you, and learn of me; for I am meek and lowly in heart: and ye shall find rest unto your souls. For my yoke is easy, and my burden is light". Matthew 11:25-30 and "And Cornelius said, Four days ago I was fasting until this hour; and at the ninth hour I prayed in my house, and, behold, a man stood before me in bright clothing, And said, Cornelius, thy prayer is heard, and thine alms are had in remembrance in the sight of God. Send therefore to Joppa, and call hither Simon, whose surname is Peter; he is lodged in the house of one Simon a tanner by the sea side: who, when he cometh, shall speak unto thee. Immediately therefore I sent to thee; and thou hast well done that thou art come. Now therefore are we all here present before God, to hear all things that are commanded thee of God. Then Peter opened his mouth, and said, Of a truth I perceive that God is no respecter of persons: But in every nation he that feareth him, and worketh righteousness, is accepted with him. The word which God sent unto the children of Israel, preaching peace by Jesus Christ: (he is Lord of all:) That word, I say, ye know, which was published throughout all Judaea, and began from Galilee, after the baptism which John preached; How God anointed Jesus of Nazareth with the Holy Ghost and with power: who went about doing good, and healing all that were oppressed of the devil; for God was with him".Acts 10:30-38 (e.g., Christ "preaching peace").] Judgement is not portrayed as an angry threat, but an undeniable inevitability, but one which could be emptied of its terrors through Christ.

But today, partly due to our excuse-making age, and partly due to the fact that the Church has influenced society well beyond its boundaries, people cannot take Judgement very seriously. They are more likely to see themselves as victims than sinners, or take comfort in their inoffensiveness (or even relative "niceness") as decent citizens. Only in the light of the holy love that St Paul demanded of us today, and in the light of Christ himself, can those in this state see more clearly. That is why it is so important for us to reflect Him in our deeds and reveal him in our words.

Also, it is difficult for people to believe that "gentle Jesus, meek and mild" could preach Judgement or be the fearful Judge. But He is, and He did. How can we make sense of this aspect of Christ? In Revelation 3:19 He says, "As many as I love, I rebuke and chasten." That puts all those seemingly harsh words of Jesus to both his enemies and his friends into perspective. He loves us: enough to tell us the truth, that we may turn from darkness to light and then avoid falling back into darkness.

Consider this analogy. A man walks along train tracks facing the wrong way, just beyond a curve in the tracks, out of sight, mistakenly sure he knows the timetable means he is safe. A woman sees a train coming around the bend. She gestures to him. He ignores her. She yells at him. He ignores her. She screams out, "Get off the track you idiot, or I'll shove you off." One would have to be pretty dense to complain about her harshness of speech. Even if she was responsible for the trains running, as head of the railway's network.

Similarly, there is nothing unloving about Jesus rebuking us sharply in order to save us, even if the salvation is from his Judgement. After all, human beings can be remarkably hard-hearted and block-headed, stubborn and uncaring. Most people need a "sharp jab" to take serious things seriously. In other words, the idiot on the tracks is not that unusual.

So, there is no point trying to turn the Gospel into a mere therapy or analgesic/pain-killer. It is a rescue from self-destruction, and can only be understood when it is realised that the darkness of self-obsession and selfishness cannot coexist with the light of God's love. The choice between eternally holding onto sin and letting go of it to grasp hold of the Cross cannot finally be avoided. But Jesus wants us all to know his peace and hope, even when he speaks words hard to hear. +

The painting used is titled "The Great Last Judgement". It is an oil on canvas altarpiece, painted by the Flemish artist Peter Paul Rubens between 1614 and 1617. This painting shows the Last Judgement, with Jesus at the top centre. To Jesus' right is his mother the Virgin Mary and to his left is Moses, holding the tablets showing the Ten Commandments. Rising up the left hand side of the painting (at Jesus' right hand) are the blessed, whilst the damned fall into hell on the right hand side. At the base of the painting are the dead, dying and those just resurrected.