Feast of Saint Hilda Of Whitby 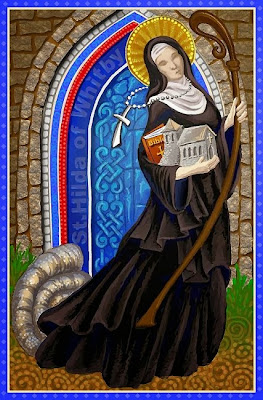 This Sunday's mass was on 17th November
which happens to also be The Feast Of St Hilda.

Saints exist in many religions as people who have been recognised within their tradition as having fulfilled the highest aspirations of religious teaching. It is written that a Saints' "surrender to God's love was so generous an approach to the total surrender of Jesus that the Church recognises them as heroes and heroines worthy to be held up for our inspiration".  Saints are not thought to have power of their own, but only gifts and mercy granted through God. They are role models of holiness to be imitated, strengthening and encouraging the believer within us, during the times of weakness in our spiritual journey. They remind us of the level of dedication and success achievable through the mercy and grace of God.

St Hilda Of Whitby was described as a woman of great energy, who was a skilled administrator and teacher and is considered one of the patron saints of learning and culture. Her correct name, Hild, means "battle" a strong name for a respected and influential woman who was the abbess of several monasteries. She was recognised for her wisdom and is credited as being an important figure in the conversion of England to Christianity.

Her monasteries were considered as great centres of learning, where clergy, monks and nuns could receive a rigorous and thorough religious education. During her time as abbess, she established the arts and sciences so well that it was regarded as not only the best seminaries for learning in north eastern England but also the then known world. Both monks and royalty sought her wisdom and advice.

As a landowner she discovered and nurtured the poetic gift of one of her herdsman Caedmon. He later composed the first hymns in the English language. Most of them were "metrical paraphrases of narratives from Genesis and the Gospels", helping to spread the word of God to the commoners.

St Hilda is recognised for her role regarding the Synod of Whitby 664, which proposed organisational changes to some of the inherited Celtic tradition and custom of over 350 years that Hilda favoured. Illustrating her obedience and humility she agreed to the decision to follow Roman influence, against her own personal preference. She chose to use her influential power to aim at a peaceful unity of the Church.

Local legends of St Hilda influence say that when sea birds fly over the Abbey they dip their wings in her honour and she could stop the local birds ravaging the corn with her command. The ammonite genus Hildoceras takes its scientific name from St Hilda, who according to legend turned a plague of snakes to stone through prayer. This legend accompanies the presence of ammonite fossils found on the shore, which were thought to be the petrified snakes.

The night before Hilda died a nun reported a vision of the
roof opening and seeing her being carried to heaven by angels. 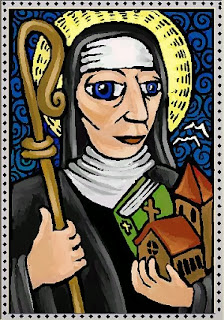 and the inspiration of our blessed St Hilda.
Stir within us the passion for creativity and learning
so that we may grow and mature.

Inspire us with your wisdom
while strengthening our desire
and commitment to succeed
in the tasks you place before us.

Grant us the grace
to respect and love our fellow Christians
with whom we disagree,
that our common life may be enriched
and your gracious will be done.

We ask this through Jesus Christ our Lord,
who liveth and reigneth with thee and the Holy Spirit,
ever one God, world without end.  Amen.


To the parishioners and friends of St Hilda's Anglican Catholic Parish Of Maitland, may the strength, dedication and achievements of the blessed St Hilda Of Whitby be an inspiration to you.
God Bless.