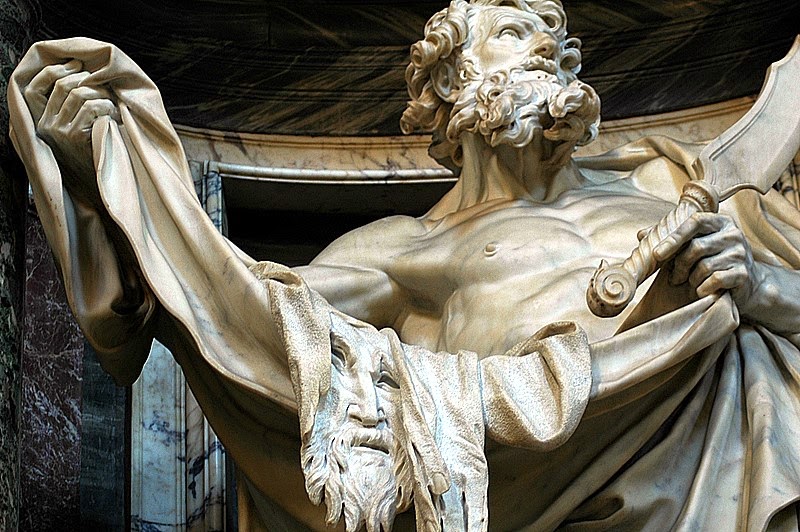 Sermon Summary from St Bartholomew's Day, some weeks ago.

"Behold an Israelite in whom is no guile" +

A saint known by two names.
Bartholomew is a patronymic (a name based on male ancestry), meaning "Son of Tolmal".
The other name he is known by is Nathaniel meaning "Gift of god".
Are you using your gifts to build God's kingdom as the Apostle did?

In the Gospel of according to John, Nathanael is introduced as a friend of Philip. He is described as initially being skeptical about the Messiah coming from Nazareth but nonetheless follows Philip's invitation. Jesus immediately appraises him as  a man in whom there is no deception.

"Can anything good come out of Nazareth?"
People forming Prejudice based on a place of origin is common. And it is true that places and cultures do have identifiable characteristics and tendencies that can be bad. Nazareth had a bad reputation which it may well have deserved, and was not mentioned on prophecy as being a source of the great. But prejudice is pre-judging before the facts are known. Judging an individual negatively based solely on where they come from is unjust and unreasonable. If Nathaniel had been content to rest in his prejudice, imagine what he would have missed! But he did not.

"Come and see."
The expression "come and see" is used more than once in this chapter. If we shine the light of Christ, we will be able to make the same kind of invitation into our friendships, homes and
churches, and thus bring people to faith. Similarly, people can be invited to meet Christ in the Gospels by reading them, to see for themselves who He is. But living contact at the personal level is very important.


"Behold, an Israelite in whom is no guile!"
The Apostle may have spoken unjustly, but our Lord respects his honesty. He's a "straightshooter". And, when he realises his mistake, as Jesus shows his miraculous knowledge, he immediately turns completely around and makes a great statement of faith. Would that all human beings were so quick to change opinions based on evidence, to move from unbelief to belief based on the evident truth of God's power and wisdom.

" ... the angels of God ascending and descending on the son of Man ..."
This is a reference to Jacob's ladder, a vision of the patriarch in Genesis. When the vision is over he calls the place he is in the gate of Heaven. Jesus is revealing that he is the gate of Heaven, the doorway to Divinity, the Way or path. Interestingly, Christians were first called those of "the Way".

Lessons?
Use your gifts for the good of the people of God. Be open to people as individuals, wherever they hail from. Be a straightshooter, but also honest enough to change when the truth demands it. And let us all walk-the-walk as well as talk-the-talk so that the invitation "Come and see" will mean something, so that those around us will encounter Christ, and through Him know the Father. 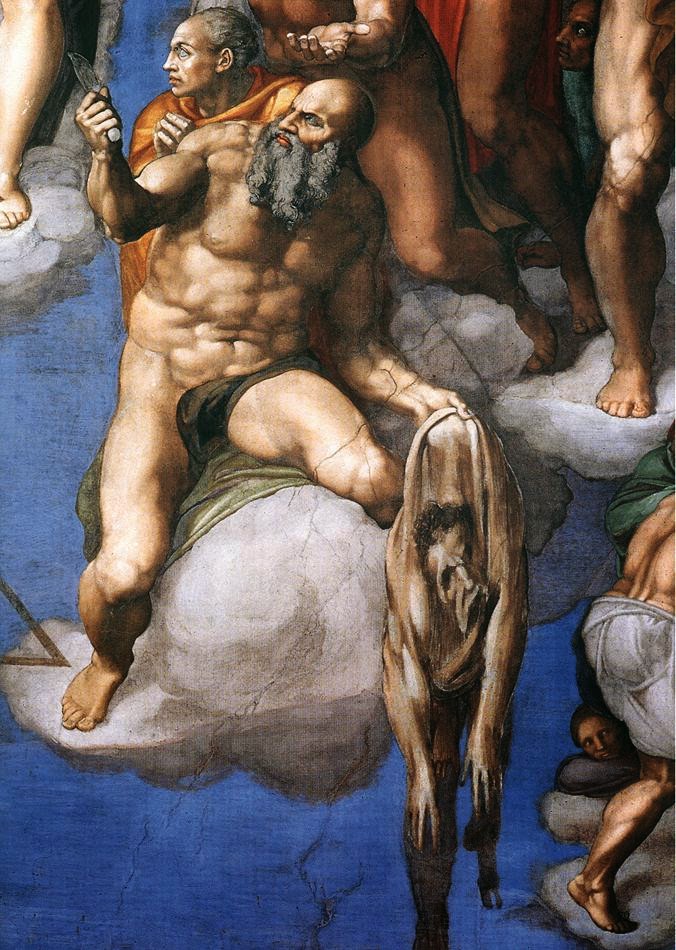 Christian tradition has three stories about Bartholomew's death: "One speaks of his being kidnapped, beaten unconscious, and cast into the sea to drown. Another account states that he was crucified upside down, and another says that he was skinned alive and beheaded in Albac or Albanopolis", near Başkale, Turkey.

The account of Bartholomew being skinned alive is the most represented in works of art, and consequently Bartholomew is often shown with a large knife, holding his own skin, or both.

The image at the beginning of this blog entry is a 14 feet high sculpture of St Bartholomew by Pierre Legros, from 1712.

This painting of St Bartholomew (on the left) is part of the "Last Judgment", from the fresco by the Italian Renaissance master Michelangelo done between 1536 and 1541.  Created on the altar wall of the Sistine Chapel in Vatican City, it depicts the Second Coming of Christ and the final and eternal judgment by God of all humanity, where the souls of humans rise and descend to their fates, as judged by Christ surrounded by prominent saints including Bartholomew.