Who is St Helen Of The Cross ? 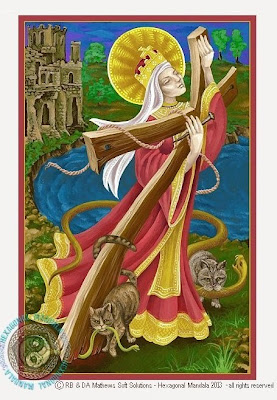 It is written that a Saints' "surrender to God's love was so generous an approach to the total surrender of Jesus that the Church recognises them as heroes and heroines worthy to be held up for our inspiration". A Saint is someone who has managed to become "Christ-like" in some aspect of their life,  "someone through whom we catch  a glimpse of what God is like". Saints are not thought to have power of their own, but only gifts and mercy granted through God.

Who is Saint Helen ?

Saint Helen also known as Helena Augusta, St Helena of Constantinople and St Helen of the cross, is credited for her success in locating relics of the true cross upon which Jesus Christ died.

Helena married the Roman general Constantius Chlorus around 270AD and they had a son, Constantine. They had been married for 21 years when Constantius took advice to divorce his wife. He abandoned Helena and Constantine to remarry into higher nobility. Helena was a woman of gentleness and integrity and was deeply hurt. Constantius married the stepdaughter of the Emperor Maximus under whom he was named Caesar until he died in 306 AD.

In the early 300's Helena's son Constantine become the most powerful military figure in Rome and was finally declared Roman Emperor.

At age 63 Helena converted to Catholicism with the support of her son. She had experienced a dream about the true cross of our Lord and she felt divinely appointed to find it. She took to the task with enthusiasm but on arriving in Jerusalem she discovered that Christians no longer visited the holy sites, as they were covered by pagan Roman shrines and false idols of the previous 180 years. Christians in Jerusalem rejoiced as, in the name of her son, she had the pagan monuments torn down and the land cleared in preparation for erecting Catholic churches. Helena was responsible for uncovering the true cross on which Christ was crucified along with nails, rope and other artefacts. Tradition states, in proof of it being the true cross of our Lord, it was responsible for raising a dead man when they touched him with it, and a grievously sick woman was instantly healed when the shadow of the cross fell upon her.

Before Helena took the cross to Cyprus the country had been without rain for 36 years, becoming desolate, drought ravaged and deserted due to hardship and famine, it also becoming overrun by poisonous snakes. As the Cross was brought into the land, so the rains came bringing with them a material and spiritual renewal. To help rid the area of snakes Helena imported a boatload of  cats which were released at Cape Gata. Constantine's governor erected a Monastery on this peninsula. The monastery is now known as St Nicholas of the Cats.

We all encounter various physical limitations and weaknesses of human nature, at times becoming fearful, emotional, tempted, distrusting and unfaithful. Saints are not angels or Gods, they people like us, who with Gods grace have overcome some of the problems or limitations that we all face. They are role models of holiness to be imitated, strengthening and encouraging the believer within us, during the times of weakness in our spiritual journey. They remind us of the level of dedication and success achievable through the mercy and grace of God.

Helena suffered the rejection of her husband and a break-up of a 21 year marriage, seeing her family unit shatter. As Constantius replaced her and gained more power, Helena managed to find direction and strength through the Lord. She found her focus in God, who obviously had bigger plans for her. She used her wealth to restore the holy landmarks and to locate the life-giving symbol of hope and victory. Converting to Catholicism at age 63 reminds us that regardless of age we are all useful in serving God.

St Helen Inspired Prayer:
O life-giving God of peace and victory, the inspiration of our blessed St Helen. Enrich our lives through your gracious love, inspiring our forgiveness and respect to others, especially through times of our own pain: Stir within us the passion for truth so that we cast off false idols, always seeking the presence of our true Lord: Inspire us with your wisdom while strengthening our desire and commitment to succeed in the tasks you place before us: Grant us the strength and devotion to rise up to your call during our daily struggles, to follow the light of the precious cross to victory.
We ask this through Jesus Christ our Lord, who liveth and reigneth with thee and the Holy Spirit, ever one God, world without end.  Amen

The artwork and prayer of St Helen is used with the permission of the artist.
Archival art-prints are available for sale. Link for More Information.